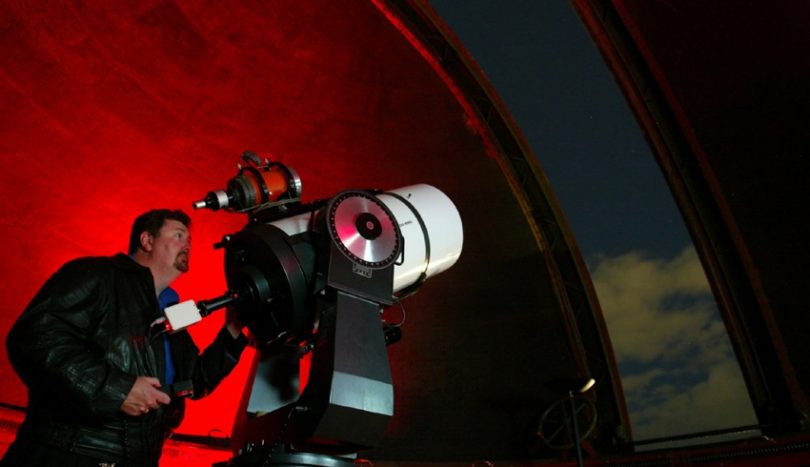 Whenever you start looking into telescopes you will find that there are quite a few options and decisions that you will need to make.  Perhaps one of the most fundamental is the choice of refracting telescope vs. reflecting telescope.

Don’t have any clue as to the differences and don’t know where to start?  You are lucky, as we’ve gone through with this article and laid out everything that you need to know on the subject. Keep reading to gain all the information that you need in order to make the right choice for you and your set up.

A telescope is an instrument that is designed to observe remote, and in most cases, celestial objects. The telescope is generally regarded as optical telescopes, however, there are other telescopes that are designed to read the spectrum of electromagnetic radiation and to detect other signals. 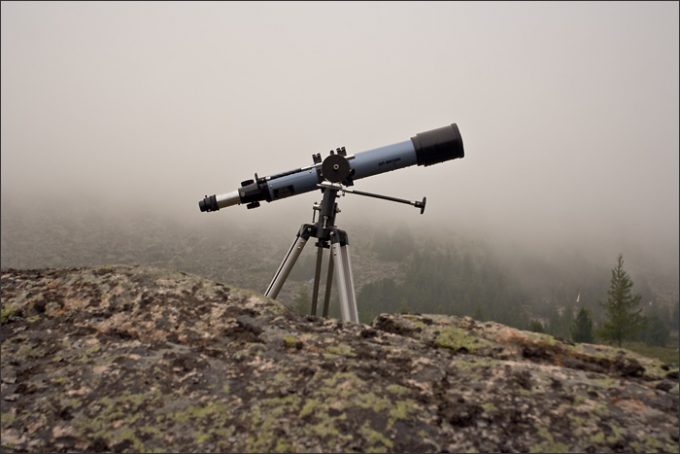 Telescopes work by increasing the apparent angular size of distant objects and at the same time increasing the brightness of the object from that said distance. They work by employing one or more curved optical elements like lenses or mirrors. These lenses gather light or other radiation and bring it closer to a focus.

It is at this point that the image can either be observed, photographed or studied. Optical telescopes have been used for astronomy studies and other non-astronomical studies for a long time.

Benefits of Using a Telescope

Telescopes have been used for centuries by scientists and others and they have helped shape our understanding of the current celestial knowledge. What then are the benefits of using the telescope?

This is very obvious as the aperture of a telescope is several times larger than the aperture of the human eye. This allows us to view objects that normally will be too tiny or invisible to the eye. 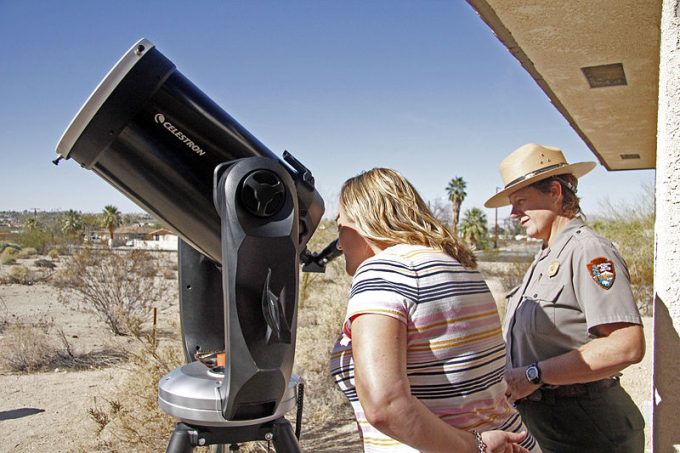 The light-gathering power of a telescope is in direct proportionality to the area of its aperture and thus relies on the square of the mirror’s radius. This means that a telescope that has a diameter of 20 cm will be able to gather photons four times more than a similar telescope with only a diameter of 10 cm.

The telescope has been designed to be able to record light for an extended period of time.  This is achieved by using a photographic film or electronic detectors such as photometers or CCD detectors. It is a great benefit as the human eye lacks the ability to record or store light.

The resolutions of telescopes are far superior to those of the human eye. Their advanced and superior resolution allows them to discern fine details of an image. 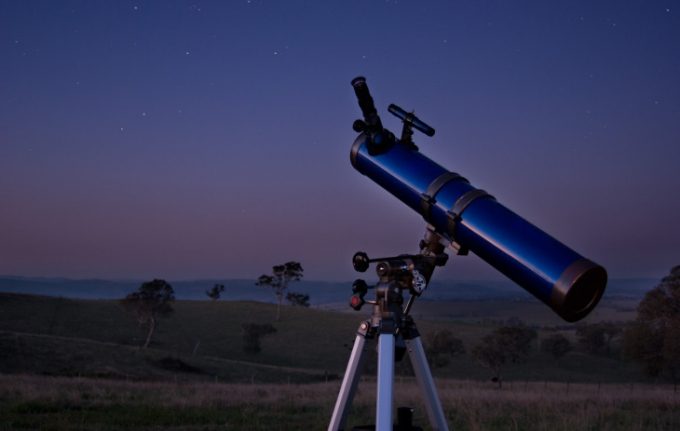 For a long time, science, especially astronomy has had to contend with just theories about space. Telescopes have allowed men to view space directly and helped make plans as to visiting it. Telescopes have also helped astronomers view and understand our solar system and the planets in it, our galaxy and even gave scientists visual access to places they never thought existed.

These are the major advantages as to why telescopes have been and will always remain very important. They have even been used in other projects and fields aside from astronomy and they have brought about so much success in all those fields.

Most Important Features of a Telescope

This is the primary feature of a telescope. When astronomers gather to discuss telescopes, the apertures is the first feature that is usually discussed. The aperture is the size of the lens or the mirror of the telescope and it focuses the light from distant objects. When a telescope is good, the aperture size is very fundamental in limiting the image quality. 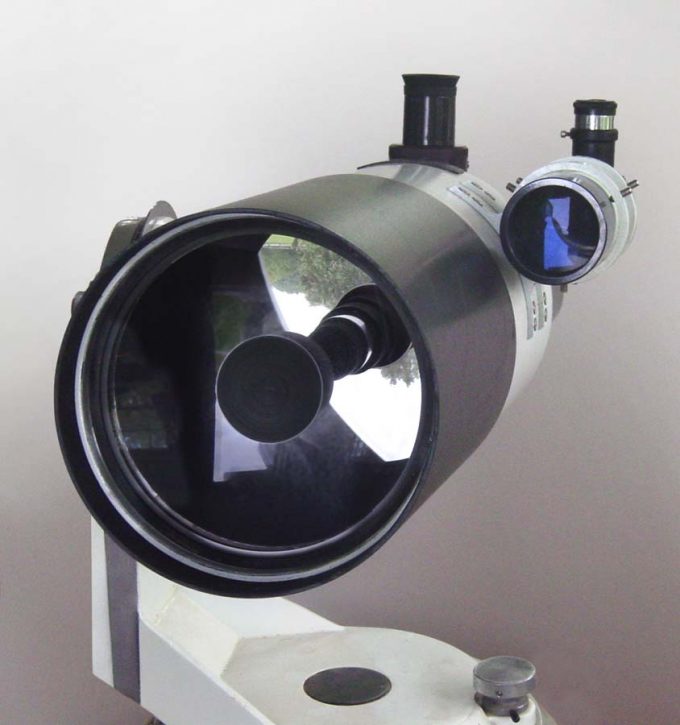 For larger apertures, you will be able to see more details of the viewed object and also view faint celestial objects. Viewing the cosmos with a 20 cm aperture telescope, it will be like increasing the size of your eye’s pupil to 20 cm, which ultimately allows you to view the objects roughly 1,000 times fainter than what is possible with the unaided eye.

That tells you the importance of aperture to the telescope. While magnification is great for telescopes, its importance cannot be compared with that of an appropriately sized aperture. In order to get a very good view of an image or a celestial body, first look at the aperture before paying attention to the magnification.

To know which one is best for you the functionality or purpose of the telescope comes into play. For viewing terrestrial and celestial objects, telescopes that use refracting lenses are better suited for the job. Most telescopes using mirrors aren’t designed for viewing birds, sailing boats and landscapes.  Often times these will result in an image that is inverted. 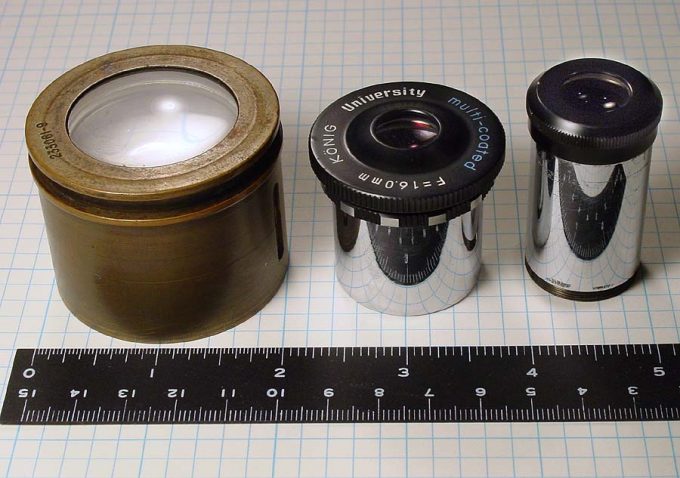 Thus, when deciding whether to use a telescope that has a refracting lens or a reflecting mirror, you will first have to analyze what the purpose of using the telescope is first. 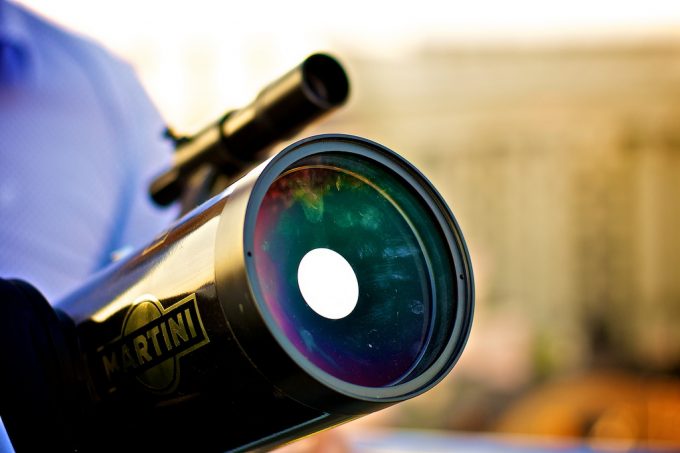 When viewing with telescopes, do not get excited by some that have a large magnification as the high magnification might not view the object to the right specification needed. Look at the magnification of a telescope after you have ascertained that the aperture and the lens or mirror fits your job purpose. 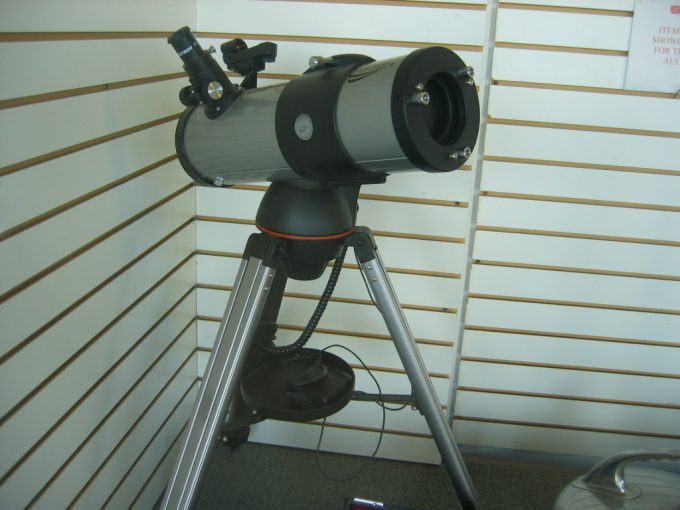 There are basically two types of telescope mounting:

The Equatorial mount allows its users the chance to follow the rotation of the sky as the earth is turning. This is very important as it makes navigation of stars using a map very easy.

The Altazimuth mounts, on the other hand, have a simpler design and they basically swing up, down, left and right. To properly navigate, you will have to move the scope often so as to follow the celestial objects as the earth rotates. It is the cheaper option but it lacks the flexibility of the equatorial mount.

This is the forgotten feature of a telescope. Most people buying telescopes do not pay much attention to the eyepiece and it is very important. The choice of the eyepiece is dependent on the function of the telescope. 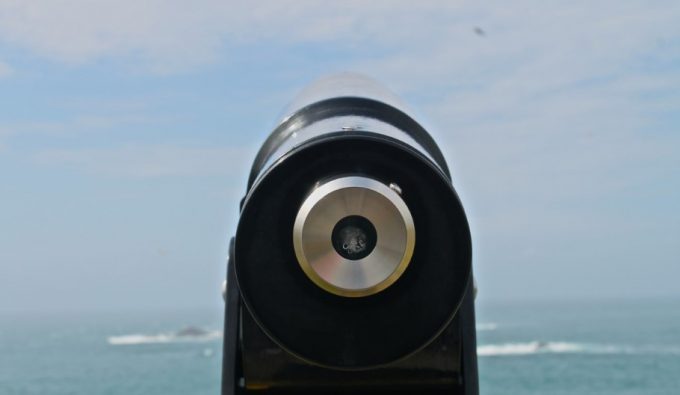 For terrestrial viewing, the eyepiece that is used differs from those that are used for celestial viewing. It is therefore very important to choose the best eyepiece option for the task at hand.

There are basically three types of telescopes.  We’ll go into some detail on each below.

They are also called refractors and they have a lens that is found at the front of the tube. It is the telescope that most people are familiar with. They use lenses instead of mirrors and their eyepiece is found at the bottom. 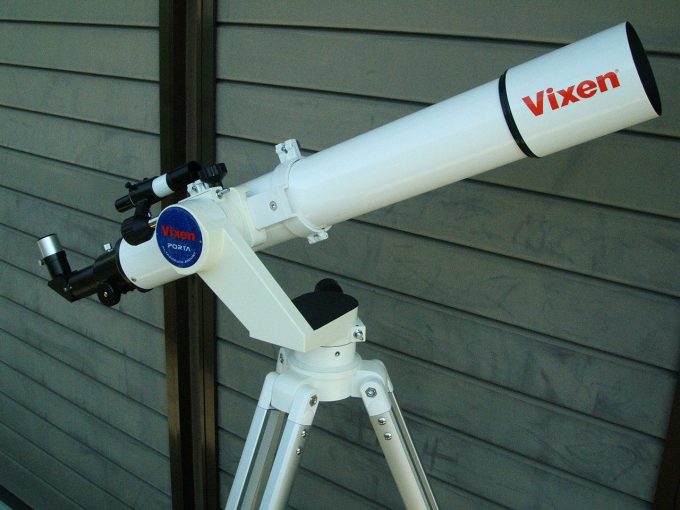 Refractor telescopes have similar designs with binoculars and to a certain extent, spotting scopes. Images captured by refracting telescopes are mirror images and the images can be corrected using an erecting prism.

This telescope goes by a number of different names. They use mirrors instead of the lens and its eyepiece is located at the side of the main tube. 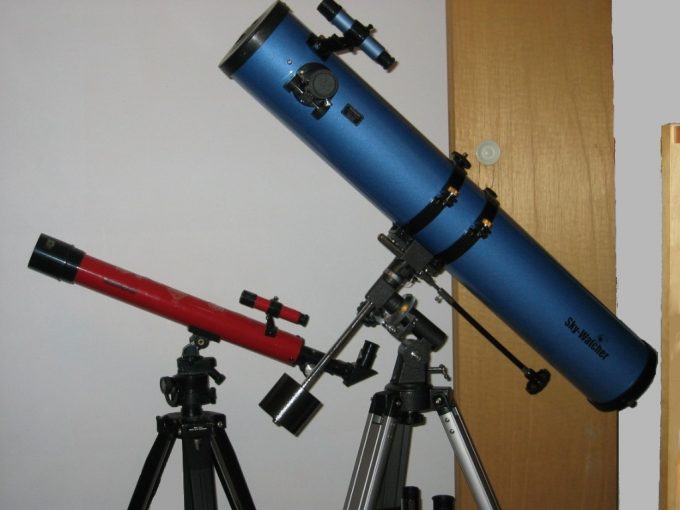 There is a need to adjust the optics of the telescope every now and then but the adjustment method tends to be rather straight forward. To view images, you will have to look through an eyepiece on the side of the tube up near the top.

These are sometimes regarded as advanced telescopes as they use a combination of lens and mirrors. They have compact tubes and are light in weight. 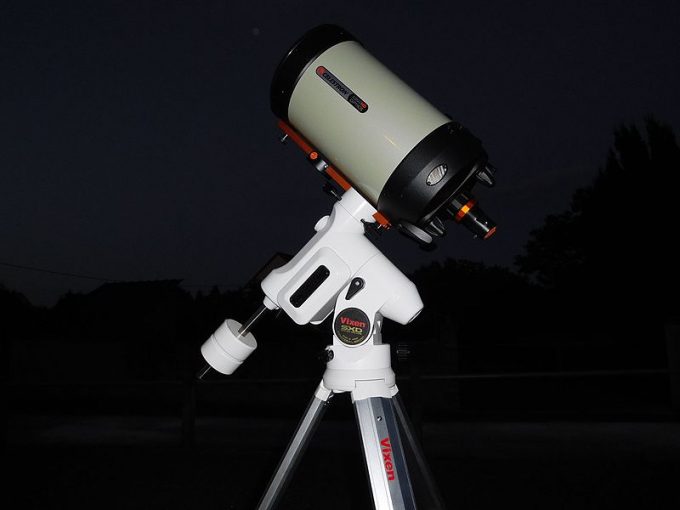 The corrector present in this telescope increases the performance of the instrument as air currents are completely eliminated. The advantage of this type of telescope it is very portable has a short physical length and along that length, the light path is folded back by itself.

Picking a Refracting or Reflecting Telescope

The two major types of telescopes are refractors and reflectors. At this point, you have a good basis in the parts of the telescope and understand the differences between them. How then do you choose the best one for you and what are the benefits of one over the other? Let us have a look at them.

It has a more sophisticated design that makes it look like binoculars while most reflectors look like spotting scopes. So, consider your budget primarily before deciding on which one to get. 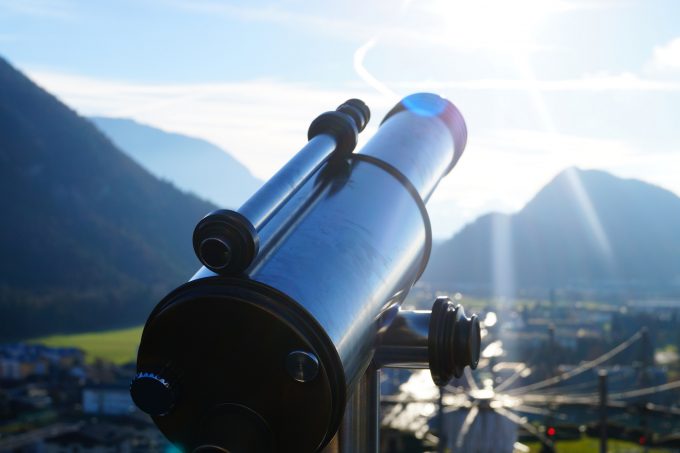 Each of the telescopes was designed for a particular purpose. However, the refractor telescope is superior to the reflector telescope when it comes to viewing ability. The refractor allows you to view objects that are very wide.

The refractor telescope is used mainly to view celestial objects like the moon, stars, and planets. The reflector telescope on the hand is best suited for viewing terrestrial objects such as animals or landscape. 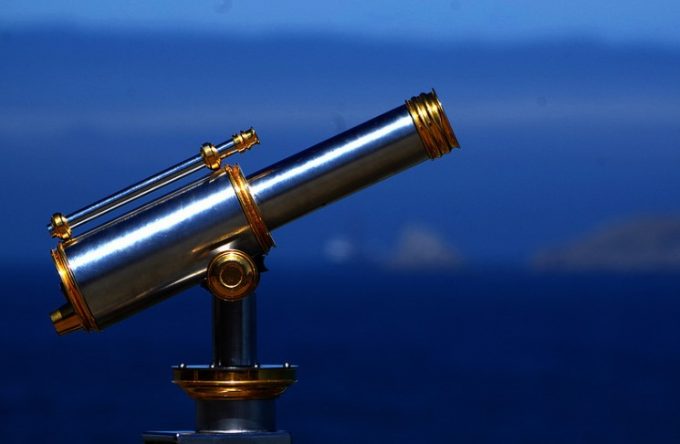 However, refracting telescopes have a definite size limit. This is because it is very expensive to make large lenses. It is more economical to construct large mirrors that are used for reflecting telescopes. If your viewing criteria include a lot of light gathering power in the form of a bigger telescope, then the reflector is the best choice for you.

This is a very straight forward and one of the major difference between the two. The reflector telescope uses mirrors for viewing while the refractor uses the lens. This is the feature that differentiates them a lot as the viewing piece is very crucial in deciding the size of an object to view and the corresponding distance. 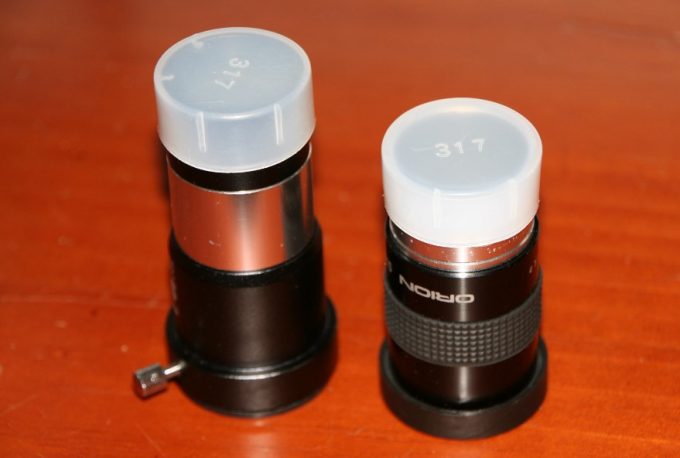 If you are looking for telescopes that are light in weight, then the refractor telescope is the perfect choice for you. The reflectors have very big apertures and thus have more weight. 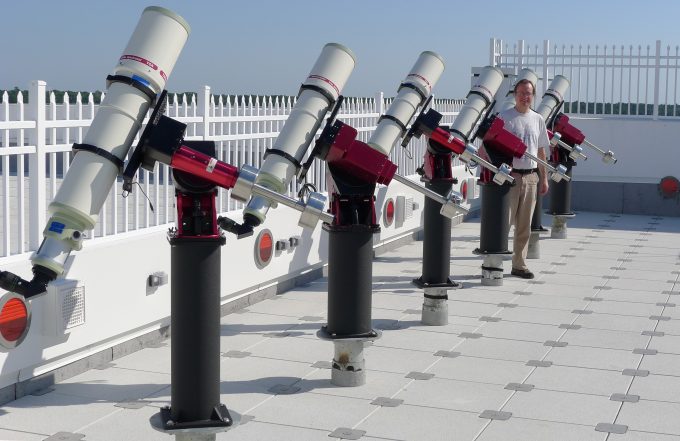 Their apertures are measured in millimeters, and they tend to be very expensive as they get larger, which packs on the weight. The refractors are great for beginners as they require little to no maintenance. The maintenance of reflector telescopes is more tedious.

The features of reflector telescopes include:

The features of refractor telescopes include: 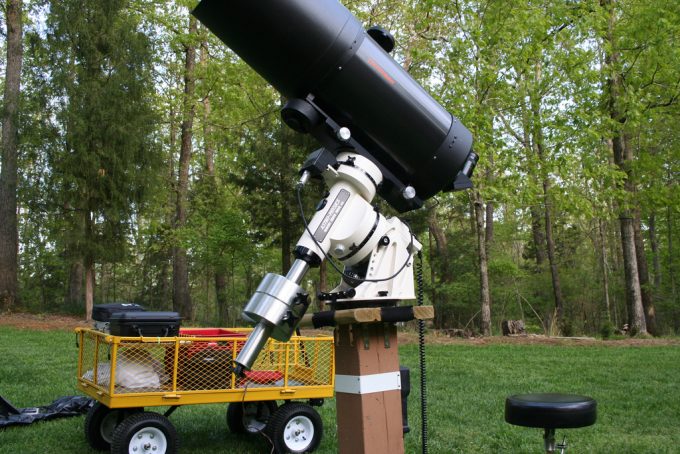 The choice is also dependent on the budget. Refractors are more expensive than the reflectors.To make the best choice, you will have to consider the purpose, the budget and the required specifications before finally making a decision.

Both the refractors and the reflectors are very good and are used for specific tasks. It is very important that the purpose, required features and budget are considered when making a decision.If you are still debating on which one to go for, then this guide will help you in making an informed decision.  At this point, you should have the information that you require, and now the final choice is yours to make. 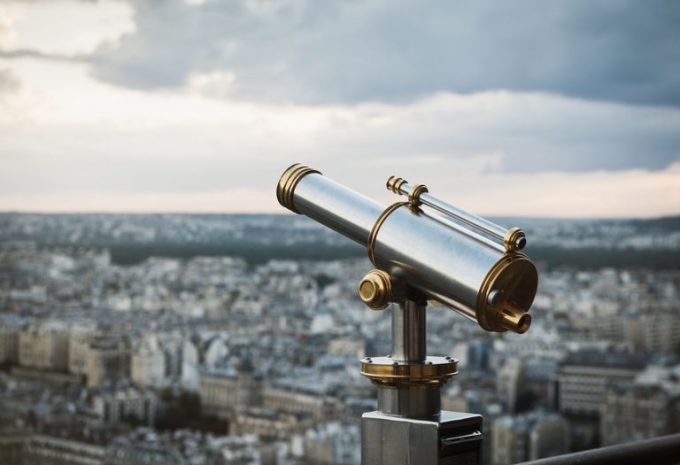 If you have brought a telescope, tells us which one and share with us how you were able to decide in the comment box below.

Cole’s passion is travelling around the world. His favourite destinations are South Asia and Western Europe. Cole spends lots of time sailing and knows how important is to have a good gear while you are in the middle of the ocean. Another thing that he is passionate about is astronomy, he says that the best place to look at the sky at night is usually far from the coast.

Most Popular In This Category